Well, it's been two weeks and I have actually made some progress on Retro.  At first I was sort of... stuck.   I figured I needed to get the bedroom cabinets out in order to remove the wall paneling, some of which had been water damaged.  There were screws holding the top of the front of the cabinets to the ceiling, but I was uncertain of how the rest of the cabinets were held in.   It turned out to be a stack of 1X2 furring at the back which the rear of the bottoms of the cabinets were nailed into.  The furring stack was screwed to the metal frame of the bus.   Using a prybar I was able to get the cabinets out without too much damage,  and when I replace them, I will screw the back to the stack of furring strips so that it can be removed more easily in the future. 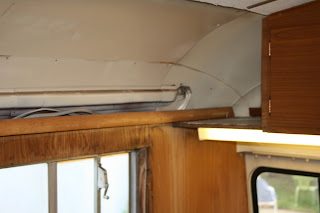 After getting the cabinets out, the wall paneling came pretty easily, I had to cut some sections but mostly I was able to pry it off.    Some of the fiberglass insulation was soaked and moldy, all the rotted wood and moldy fiberglass went to the dump.   Fortunately the specially cut corners were intact and I can use the old wall panel sections as templates for the new replacement wood.

After getting the walls out, I took out the aluminum water tank, plumbing and water pump. Then  I ripped up the carpet - both the "nice" carpet in the walkway and the industrial soundproofing carpet which had been under the beds.    This exposed the wood underlayment of  the floor,  some of which had also been rotted away from water leaks over the years. 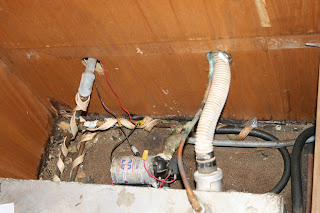 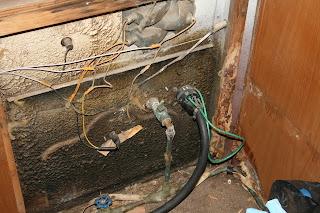 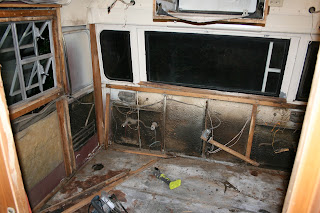 Now the metal floor of the bus is exposed and there are a few issues to take care of!   First there is about a 4 inch hole which had been cut for the fresh water tank drain / cleanout.   Having looked in the tank (uugghh!)  I am pretty sure I am replacing it with a shiny new plastic one, so the hole can be closed and a new (smaller) hole installed for the new tank.  I want to weld a plate into the hole (or over it perhaps) to restore the structural integrity of the floor.   Also,  the floor is rusted in several areas.   This will be a job for Ospho rust converter.   The Ospho will convert the rust into Iron Phosphate, which is a stable form of metal.   I will then paint the entire floor with a good rust-resistant primer. 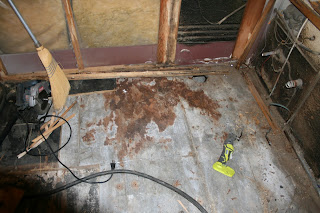 In addition to the demolition on the bedroom,  I removed the Jacknife sofa from the living room.This will let me remove and replace the water damaged wall panels which were behind the couch. 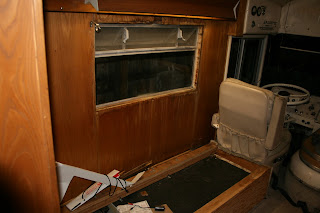 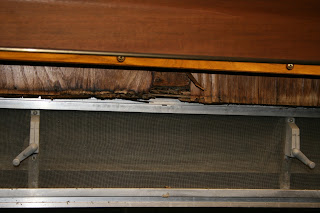 This brings us about up to date.
The next few weeks will see us working on:

Maybe I will update in one week instead of two next time.