Despite my lack of posting,  I have been working through the issues since I pulled Retro's radiator.    You can see in the first picture that the water pump inlet hose was run through the power steering pump belt.  This seems like a bad idea  ( I think a P.O. may have replaced the water pump with the only one they could find  - perhaps  pre-internet,  who knows? ).   I don't like the idea of having to drain the cooling system if the power steering belt breaks.  I found a pump which the inlet is straight,  not bent forward so that the hose could be routed around the steering pump.   The pump I got did not have a pulley on it, so I took the new pump and the old pump to the local community college and one of the instructors there used a hydraulic press to put the old pulley on the new pump. 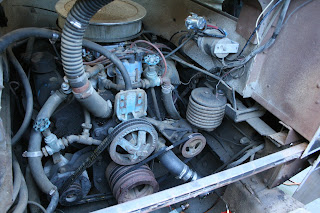 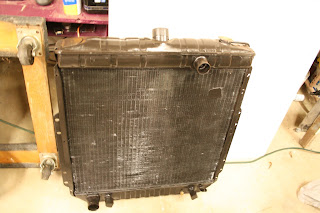 I removed the plumbing wrapped around the front of the engine - one side was for the rear heater,  the other for the front one.  It looks like it grew over the years - there were multiple valves in the same line in some cases, I am cleaning all that up and will have two valves in each circuit - one for hot water feed and one for cool water return, so I can isolate a loop in case of a problem.   The rear heater feed will split off to run the engine heat circuit of the water heater.   I have marked all the original hoses and am going to replace all the rubber hose with fresh new high-quality hose. 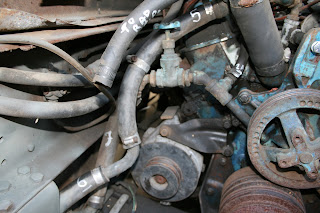 I read some advice to put an engine fan and shroud back on and I took that to heart.   I found and bought the "High fan mount"  that attaches to the plate on top of the water pump,  but was not able to find a modern fan clutch and fan that would fit ( I had several phone calls with flex-a-lite and hayden ) the only fan I could find was an original equipment steel fan.  I decided to re-engineer the electric fan cooling system and am settling on 4  12 inch fans  for the 24 X 26  radiator.   I will build a frame and shroud for these fans,  along with two multi-speed controllers.   I am also going to replace the original ?55A?  alternator with a high-output self-regulating  200A model.  This will provide plenty of current to run the fans.

Another issue that I worried about was the condition of the inside of the gas tanks.  I built some blocks to put under the wheels,  and also jacked up the frame and placed jack-stands.   The suspension is about half-loaded, and if a jackstand fails,  the tires are nearly 4 inches off the ground.   This height gave me room to slide the gas tanks out from under the coach.  I only had to grind one of the nuts off - most of them came pretty easily.   I got the tanks out today and pressure washed the outside,  I will be taking them to San Leandro  Radiator  ( the folks who restored my radiator )  to be refurbished - sand-blasted inside and then coated with kreem.    I also discovered the broken wire for the front-tank fuel gauge sender,  so I am hopeful to get that working. 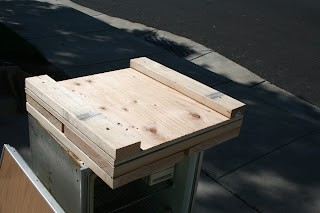 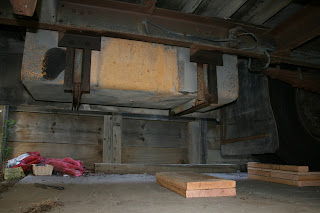 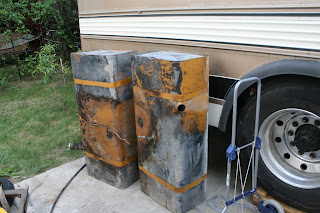 I expect the fuel tanks,  alternator, new transmission cooler hoses (needed for the swingification of the radiator) / heater lines and coolant hoses to take me into the June timeframe, based on daddy couldya timesinks and the accumulation rate of expendable dollars.  I will post more then.
Posted by Unknown at 12:01 AM